Beast wishes from the Dephosphorus camp in the occasion of the winter solstice celebrations and the impending new year 2018!

As you probably have noticed by now, we rarely play live due to the geographical distance that separates our guitarist/songwriter Thanos who lives in Sweden, and the rest of the band. That’s why we are so excited to announce our second gig ever, which will also be the “Impossible Orbits” album release party! Please find the details below.

We will perform “Impossible Orbits” in its entirety alongside older tunes and possibly a brand new song!

Our friends Krause will open up. They are an excellent new local band worshipping noise rock as much as we do. Their debut album 2AM Thoughts, released earlier this year, is a head turner. An interesting historical fact is that Dephosphorus founding members Panos/Thanos and Krause members Nikos (drums) and Babis (guitar) were part of grinding hardcore act Straighthate back in the mid-00’s and have recorded together their first and only album “Indigenous” – released via Blastbeat Mailmurder.

Last but not least concerning the gig, we would appreciate if you could help spreading the word via your friends, social media, blog, site, etc! 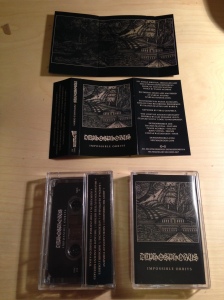 Being lovers of cassettes and all things analog, we are stoked to have our first ever cassette out!

—Selfmadegod Records, who has also released the CD version, is responsible for it.
—This is a pressing of 100 copies and will be re-pressed when sold-out.
—Due to the limited pressing and as our release gig is close, we do not sell any copies via mailorder or Bandcamp, preferring to have some in stock for the show. You can order your copy via SMG’s web store.
—If the response to this first cassette edition is positive, we’d love to repress our back catalog on tape as well – this also applying to the CD format.

Unfortunately we have no details to announce for the vinyl edition of “Impossible Orbits”. It will come later during 2018.

As some of you already know, we hit once again Unreal Studio this summer to record our fourth full-length album.

We are very excited as this is the first one recorded with a dedicated rhythm section, thanks to our new bass player Kostas Ragiadakos! It will have a different atmosphere than “Impossible Orbits” and we are aiming for a 2018 release. 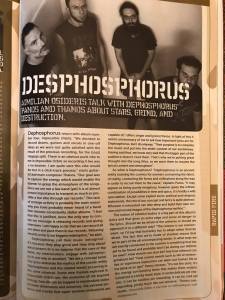 Earlier this Autumn we’ve had an interesting chat with longtime comrade Aemilios Sideris (Dysemblem, ex- Injekting Khaos) for an interview feature that was published in Zero Tolerance magazine‘s issue#080. You can read it by clicking to the thumbnail.

That’s all for now. See you at the gig and connect with us on FB -or check our web page– for more frequent updates.

This entry was posted on December 27, 2017 by dephosphorus. It was filed under gigs, Impossible Orbits, interviews, press and was tagged with the temple.

This site uses Akismet to reduce spam. Learn how your comment data is processed.